The complex relationship between firearms regulation and racial politics during Reconstruction will likely figure in the upcoming Supreme Court case, NYSRPA v. Bruen. Gun rights advocates have leaned heavily into the argument that gun control is inherently racist and was inescapably tainted by this insidious motive during Reconstruction. Unfortunately, this claim rests on a combination of ideological posturing and historical confusion. Chronology matters in history and the argument that gun control was racist during Reconstruction conflates actions taken by those who opposed Reconstruction with the policies enacted when Republicans were shaping policy in the South. Thus, the ‘gun control is racist’ canard confuses the agenda of Radical Republicans and those who opposed their efforts. Serious historical inquiry must pay attention to chronology and the different motives of various historical actors. By blurring the timeline and ignoring the different agendas of various players in the  political drama that unfolded during Reconstruction, the gun control is racist argument furthers a gun rights agenda at the expense of historical truth.

Although there is considerable disagreement among historians on how to best periodize the post-Civil War era, particularly Reconstruction, there is little disagreement that there were at least three different phases of Reconstruction. The first moment occurred during Presidential Reconstruction when neo-Confederate legislatures passed racially discriminatory Black Codes aimed at restricting the rights and power of recently freed people. Racially discriminatory gun laws were one example of this type of legislation, but they were hardly the only type of racist laws enacted by pro-Confederate politicians. The second moment, Radical Reconstruction, was shaped by the Republican-dominated state legislatures and a sympathetic Congress. The agenda during this period was to protect Blacks and Republicans. This goal required enacting scores of racially neutral laws aimed at  protecting the rights of free people and Republicans in the Reconstructed South. These laws were not only essential to protect free people, but they aimed to restore the peace, and protect the public sphere so that elections and other vital civic functions could resume in the South. Finally, in the last decades of the nineteenth century, during the infamous Jim Crow era, many southern states enacted facially neutral laws that were inspired by an insidious racist agenda. These laws were also applied in blatantly racist fashion. The chart below summarizes this complex history and offers a preliminary typology for interpreting the complex history of race and gun regulation during Reconstruction. 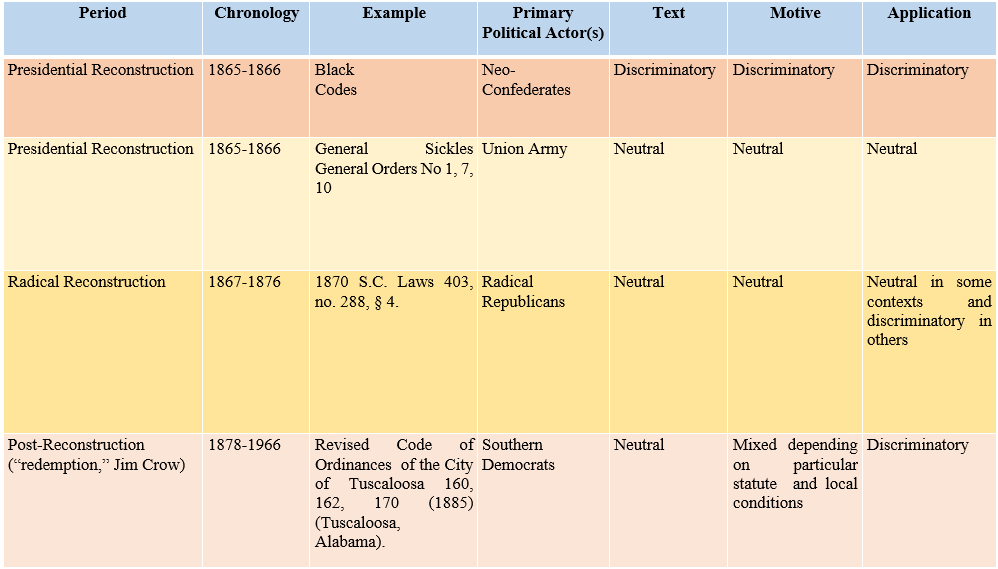