On October 1, the University of California at Davis Law School, in partnership with Giffords Law Center, put together a fabulous hybrid in person/virtual symposium:  “The 2nd Amendment at the Supreme Court: ‘700 Years of History’ and the Modern Effects of Guns in Public.”   There were some terrific panels, and I learned a lot from all the presentations, but I want to remark on the research of three historians in particular.

Jennifer Tucker, a historian of science and technology at Wesleyan University, presented some fascinating research on the late military historian Trevor N. Dupuy, which she has since discussed in this CNN op-ed.   Dupuy was a colonel in the Army, former member of the Institute for Defense Analytics, and executive director of the Historical Evaluation and Research Organization (HERO).  In 1964 he published a comprehensive report for the U.S. Army, Historical Trends Related To Weapon Lethality in which Dupuy attempted to standardize the metrics of lethality into a single index – the “Theoretical Lethality Index” – based on a weapon’s range, accuracy, rate of fire, reliability, and other metrics.  According to this index (later republished in his book The Evolution of Weapons and Warfare), when compared to a revolutionary-era flintlock musket, an 1860s breech loading rifle was more than four times as lethal; a Springfield Model 1903 rifle was 11 times as lethal, and a World War II-era machine gun was more than 100 times as lethal. 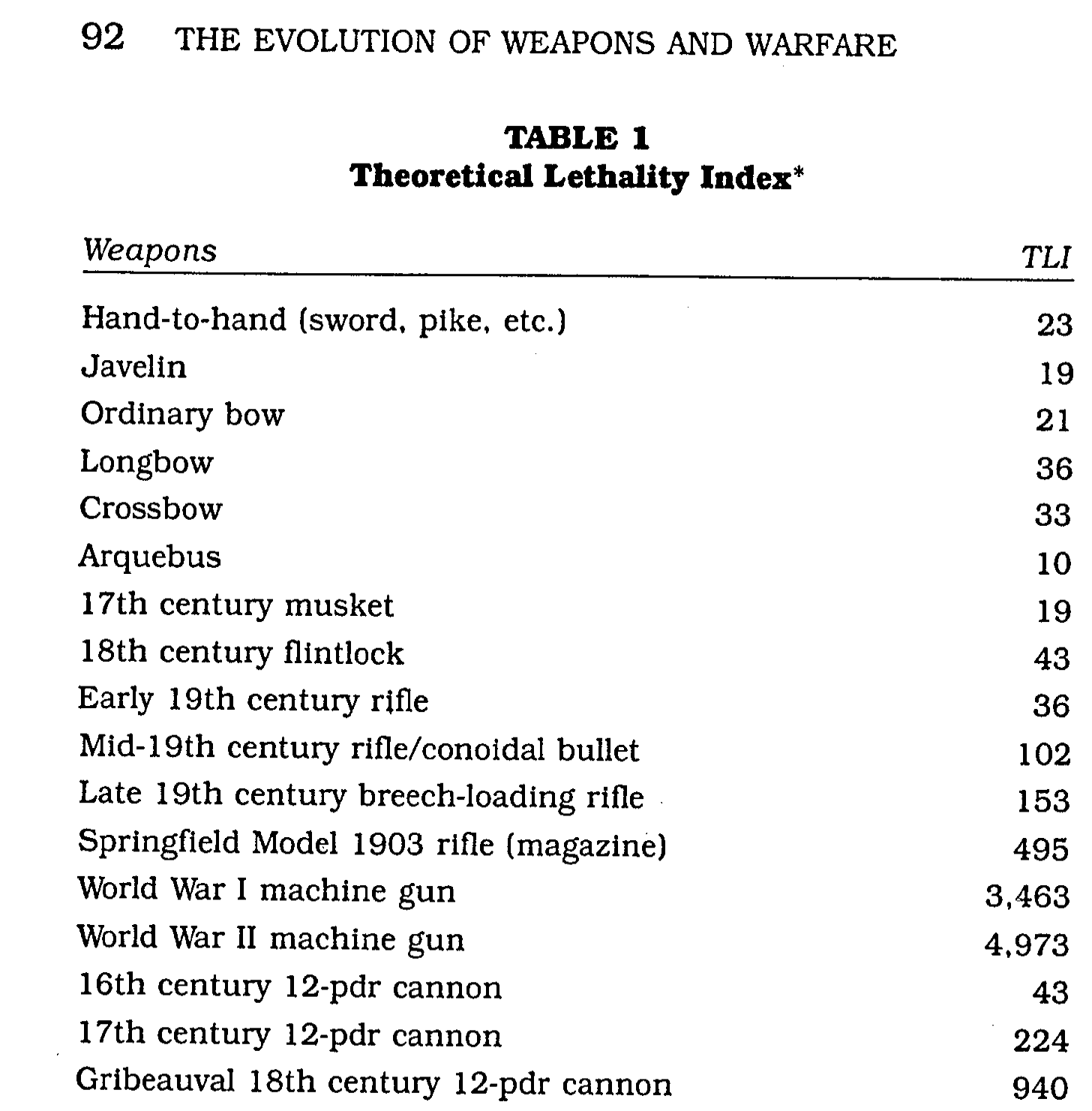 The index helps make better apples-to-apples comparisons across periods.  Two individuals armed with five-round Springfield rifles in 1903 could theoretically kill as effectively as an eighteenth-century cannon.  Fast forward to the 1940s, and it would take a battery of five revolutionary era cannon to equal the lethality of single World War II machine gun.   Most fascinating was the acceleration in lethality that coincided with the Civil War and Reconstruction.  For much of history, until the industrial age, the lethality of hand-held personal weapons was fairly stable.  That all changed during the 1840s to 1880s when, as Tucker put it: “there was an exponential increase . . .  in the lethality of firearms.”

Saul Cornell, a historian at Fordham University and a regular commentator on the history of firearm rights and regulation, presented research in his recently published essay in the University of California Davis Law Review Online.  His essay summarizes the still under-developed history of gun regulation during Reconstruction.  As he writes “The Republicans who framed and enacted the Fourteenth Amendment were eager to protect the Second Amendment rights of recently freed persons, including an individual right of self-defense.  But Republicans were equally committed to enacting strong racially neutral gun regulations, aimed at reducing interpersonal violence and preserving the peace, a task vital to the success of Reconstruction.”

Most relevant is the repeated reference to government power to regulate public bearing of arms in the state constitutions of the era.   Georgia is one example; its 1868 Constitution specified “[T]he right of the people to keep and bear arms shall not be infringed, but the General Assembly shall have power to prescribe by law the manner in which arms may be borne” (emphasis added).  Texas is another; its 1869 Constitution stated “Every person shall have the right to keep and bear arms, in the lawful defense of himself or the State, under such regulations as the Legislature may prescribe” (emphasis added).  Cornell’s Table One includes sixteen state constitutions where legislative authority to regulate public carry is expressly stated in the text (much as Blackstone famously wrote the English subject’s right to arms was limited to those  “suitable to their condition and degree, and such as are allowed by law” and “under due restrictions.”)

Finally, Brennan Rivas, the Lloyd Lewis Fellow in American History at the Newberry Library, presented a fascinating paper (now available on SSRN) about enforcement of laws prohibiting public carry in Texas.  Building upon her description of the long history of public carry regulation in Texas, explained here, Rivas rolled up her sleeves (historically speaking) and carefully reviewed prosecution records for public carry crimes in four Texas counties during the Reconstruction Era.  Her conclusion is that not only were these prohibitions enforced, but that they were enforced in a non-racially biased way until ex-Confederates wrested power from the multi-racial Republican governments in those counties.

Each of these papers on its own is an important addition to our knowledge of gun rights and regulation.  What I found most compelling was the relationship between them.  During her presentation, and later in her opinion piece, Tucker asked rhetorically what the Second Amendment would have looked like if the Amendment had been ratified in the nineteenth century (a period of accelerating lethality of firearms), rather than the eighteenth century (a period of relatively little movement in weapon lethality).

It struck me that we don’t need to consider the counter-factual, because we have data to answer that question, and it comes from Cornell’s work.   During Reconstruction, southern states engaged in an intense period of constitution-making.  And it was during this time that states rewrote their constitutions to guarantee a right to keep and bear arms, but with clear language confirming the power of the states to regulate that right.

Moreover, the regulatory apparatus was not toothless, according to Rivas’s research.  Instead, prohibitions on carrying arms in violation of the law were vigorously—and often equitably—enforced.   At least in Texas, it appears, Reconstruction-era laws prohibiting the carrying of weapons did not become a tool of white supremacist oppression until ex-Confederates and Confederate-enablers  successfully took control of state and local government and law enforcement during the Redemption and Jim Crow periods.

Independently, each one of these papers was a contribution.   Together, they give us a far more detailed and nuanced picture of the nature of gun rights and regulation during this critical period in American history.