Are There Any Red Flags for ‘Red Flag Laws’?

In the aftermath of the tragic Uvalde shooting, Extreme Risk Protection Orders (ERPOs), more commonly known as “red flag laws,” were touted by policymakers, bloggers, and gun control groups as a potential way to address gun violence. On paper, these laws are a dream come true. ERPOs are civil, not criminal, and they are temporary. In theory, these laws only impact individuals at risk of harming themselves or others, and ought to leave law-abiding gun owners unmolested. If the laws are properly executed, reductions in homicide and suicide should result. While many are critical of these laws for a myriad of reasons, this blog post—summarizing a paper I recently presented at the Duke Center for Firearms Law’s scholarship conference—only asks the following question: do red flag laws actually save lives?

The results of the analysis suggest that ERPOs unfortunately have no impact on total homicide or total suicide. Ten years before and after the implementation of state red flag laws, the average treatment effect does not statistically differ from zero for any of the outcomes studied in the sample. Neither total homicide nor total suicide were significantly affected. The graph presented in the paper for total homicide can be viewed below. 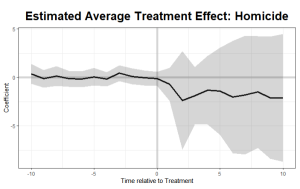 In this image, the line represents the “gap” between the treatment states (states with red flag laws) and the synthetic control states (states which do not have red flag laws but were chosen by the algorithm because their crime trends are similar to the treatment states). As expected, prior to the adoption of red flag laws, this gap is close to zero: this means the control states followed similar trends to non-control states in the pre-treatment period. After red flag laws are passed, homicide appears to be slightly lower, but the change is not statistically significant. In fact, the data actually give us good reason to believe that the decline was due to random chance. In the firearm-specific estimates, there was no discernable trend either way; the effect was larger for total homicide than firearm-specific homicide. Since ERPOs should only impact total homicide rates via a reduction in firearm homicide, the small dip in homicide rates—which was already not statistically significant—is almost certainly not caused by the red flag laws.

The results were similar for suicide. The impacts on suicide are arguably just as important, if not more so. Over 60 percent of gun deaths in the United States are from suicide, and over 60% of ERPO warrants are for self-harm (that percentage is even higher if one includes warrants where the concern was both self-harm and harm to others). Therefore, red flag laws may be more important for preventing suicide than homicide, or other gun violence. Unfortunately, the results from this preliminary study also suggest that red flag laws do not prevent suicide. The chart from the paper on suicide can be seen below. 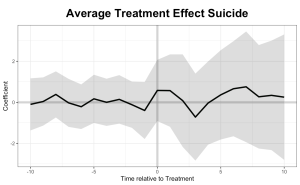 The results for suicide show even less of a potential relationship than for total homicide: there is no discernable change up or down after the implementation of red flag laws, even before taking statistical significance into account. And the results for firearm suicide are similar: no reduction in firearm or total suicide was found, and the results were clearly statistically insignificant.

Although the results of the study found no reduction in total homicide, total suicide, or firearm-specific homicide and suicide, the results for firearm suicide (and for firearm homicide) do have an important implication. Namely, there is no evidence of a substitution effect. In other words, the reason these laws do not work is not because warrant subjects are switching to an alternative method of suicide. Instead, the results suggest these laws fail to reduce suicide and homicide because they simply do not work—whether by poor design, poor implementation, or ineffectiveness. Overall, the current preliminary data suggests these laws will likely not save lives.

In spite of the null results, there are some caveats to this analysis. First, the results largely draw on data from only two states: Indiana and Connecticut. No other state has yet utilized red flag laws for a period long enough to generate sufficient data; California and Washington only briefly make an appearance. This is a preliminary finding, and more research is needed before we can conclusively write off these laws as an effective gun control measure. Second, as noted above, these laws may simply not work due to poor implementation or poor design. As more states adopt these laws, differences in enforcement will surely become apparent, and researchers may find that some types of red flag laws work and others do not. This paper does not consider variations in design among red flag laws. Finally, this paper does not examine mass shootings specifically. While a reduction in mass victim public shootings should show up in both the firearm and total homicide numbers, it is possible that those trends are masked by aggregation bias, especially because these events comprise only a small percentage of the total number of homicides. Due to data limitations—only two states having extensive experience with these laws—I opted to focus only on the broad measures of homicide and suicide. However, as more data becomes available, it will be much easier to accurately assess what impact, if any, these laws have on mass shooting events specifically.

Before the Supreme Court’s decision in Bruen v. New York State Rifle & Pistol Association, most courts applied a two-step framework to evaluate Second Amendment challenges to gun regulations. The framework first asked whether the challenged law fell outside the scope of the Second Amendment’s protections based on a historical inquiry. Then, if the law burdened protected conduct, courts asked how close the law came to the core of the Second Amendment right and the severity of the law’s burden on that right. Most gun regulations were subject to intermediate scrutiny, which requires only that the government shows that the regulation is substantially related to achieving an important government interest. The state has a compelling interest in preserving life, so the question always came down to one of fit: did these laws have any effect in practice?

After the Supreme Court’s decision in Bruen, the relevance of this evidence, and thus of the real effects of gun laws on people’s lives, is limited. Bruen diminished the paper’s legal significance, so an empirical legal paper had to become something else. In this case, an empirical paper became more about challenging the story or paradigm underlying the legal rationale. We ultimately found a lack of support for any positive effect of waiting period restrictions for handgun purchases on suicide or homicide rates, which suggests a poor fit between the law and the outcome variables of interest.

From the empirical results, our paper argues that most waiting period restrictions misconstrue the reality on the ground or at least focus on the wrong paradigm, with most gun-related deaths in America in 2020 being suicides (54%). The paper argues that the law would be better served by rejecting the common-law concept of a cooling-off period to prevent impulsive acts, and instead focusing on another paradigm.

Under Bruen‘s historical inquiry, accurately describing the legal problem to be solved or the paradigm underlying the law will be even more critical when trying to find the correct historical comparison. By changing the underlying legal paradigm, future waiting period laws might have a better chance of withstanding scrutiny. To this end, based on the empirical results finding the strongest correlations between ecological or environmental controls associated with mental health factors and suicide and homicide rates, our paper suggests “deaths of despair” as a more apt legal paradigm when enacting waiting period restrictions. Under this paradigm, legislators should focus on addressing underlying socioeconomic factors that create the long-term hopelessness and despair driving gun deaths.

Finally, our paper raises the question of how to handle a gun regulation that may have historical support and thus be constitutional under Bruen, but would not be constitutional under intermediate scrutiny because it has little to no effect. Although it is doubtful that any waiting period restriction is sufficiently similar to historic gun regulation, at least one state has employed waiting-period-type restrictions since the 1920s.  Our paper raises the question of whether historically supported but possibly ineffectual gun regulations are permissible under Bruen.