The first time I fired a gun, my dad placed a pillow on my skinny shoulder to cushion the kick and held me firmly from behind. It was a closely supervised moment. The idea that I might have had a legal “right” to just go buy a gun and shoot on my own would not have entered my father’s cautious mind at the time, for one obvious reason. I was a child—immature, irresponsible, and incapable of protecting myself (or others) from such a dangerous thing as a twenty-gauge shotgun. That’s the underlying logic of a federal firearm restriction that Congress enacted more than fifty years ago: a licensed firearm dealer cannot sell a handgun to anyone under age 21. Why? Handguns are used in most U.S. homicides and suicides, which are the second and third leading causes of mortality among those ages 15-34.[i] Therefore, young people who have not fully developed the capacity to exercise good judgment should not have unfettered access to a lethal technology that is implicated in about 40,000 deaths in the U.S. every year. It’s too risky. That would be the argument.

On Tuesday, July 13, 2021, a federal appeals court applied a different logic to conclude that the age 21 minimum standard for buying a handgun is unconstitutional. According to the majority opinion of the U.S. Court of Appeals for the 4th Circuit, the right to bear arms applies in principle “whatever the age,” and surely to 18 to 20-year-olds.[ii] This opinion apparently makes sense to conservative jurists who regard the Second Amendment only through a historical lens of “text and tradition.” But from a public health point of view, it is a dangerous reversal of a law that has likely saved many thousands of lives. In a country that has seen more gun deaths since the mid-20th century than all the American military combat fatalities from all our wars since 1775,[iii],[iv] we really need to use any proven-effective legal tool that can actually prevent risky people from accessing firearms while also respecting the rights of law-abiding gun owners. The minimum age standard set at 21 for purchasing a handgun, like the legal drinking age, is one of those laws.

The pattern of U.S. suicide rates by age over the past two decades illustrates the point. Among males, the rates of suicide by firearms and by other methods closely track each other in a smoothly increasing curve from ages 15 to 20. But at age 21, male suicide rates by method diverge. While the non-firearm suicide rate continues to follow a smooth curve, edging up 3.5% from age 20 to 21, the firearm suicide rate lurches up 26.9% in that one year. No such change is seen in any other transition year, moving from one age to the next, during the first decade of adulthood. One important factor contributing to this pattern might simply be that a 20-year-old in a moment of despair cannot legally purchase a handgun from a licensed dealer and use it to end his life; a 21-year-old can. (See Figure 1.) 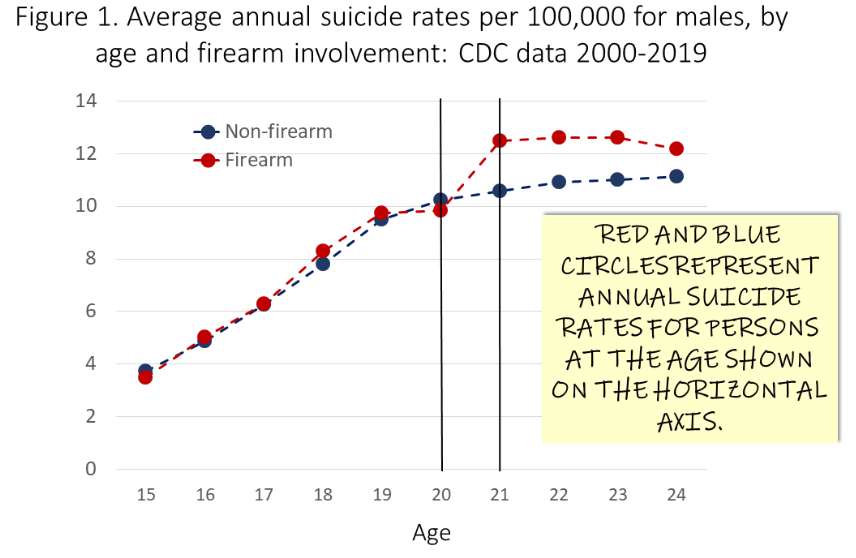 Some states have enacted additional laws that extend the age-21 minimum standard to all handgun sales including private transactions, and also broadly prohibit the possession of handguns by those under 21.[v] This statutory variation provides an opportunity to compare non-firearm and firearm-related suicide rates by age in states that allow, and do not allow, 18 to 20-year-olds to obtain and possess handguns from some other source than a licensed gun dealer. (See Figure 2.) With due caution against causal interpretation of a purely descriptive pattern, it is noteworthy that the two types of states hardly differ at all in their average age-specific rates of non-firearm-related suicide, but substantially diverge in their age patterns for firearm suicide—with the more permissive states having higher rates. This pattern could also be affected by state differences in other gun laws and their population gun possession rate. 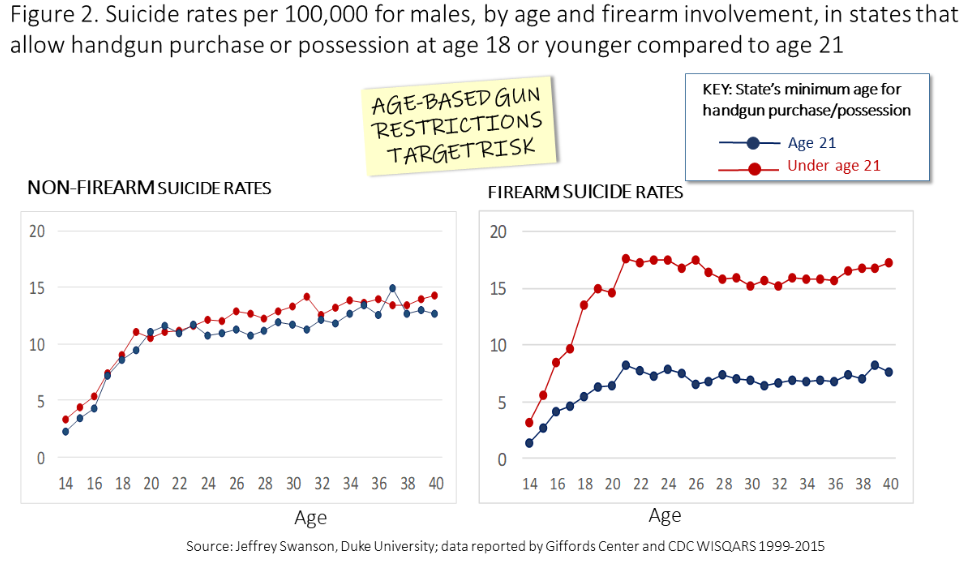 In the post-Heller legal landscape of gun regulations, the Second Amendment is interpreted to confer an individual right to bear arms, but not an unlimited right. Where should the limits on gun rights be drawn? Research from public health and social science can help answer that question with a plethora of empirical evidence on significant risk factors for firearm injury and mortality.[vi] Younger age is a particularly robust risk factor for dying as the result of a gunshot, and the risk is far greater in males, and in some regions of the country more than others. (See figure 3.) Of course, there is no biologically determined age threshold that magically transforms a vulnerable child into a responsible adult. But it is the fallacy of the continuum to suggest that the existence of dusk means there is no real difference between day and night. If 18 to 20-year-old Americans are suddenly granted the right to legally purchase a handgun from a licensed gun store, many will needlessly die with their rights on. 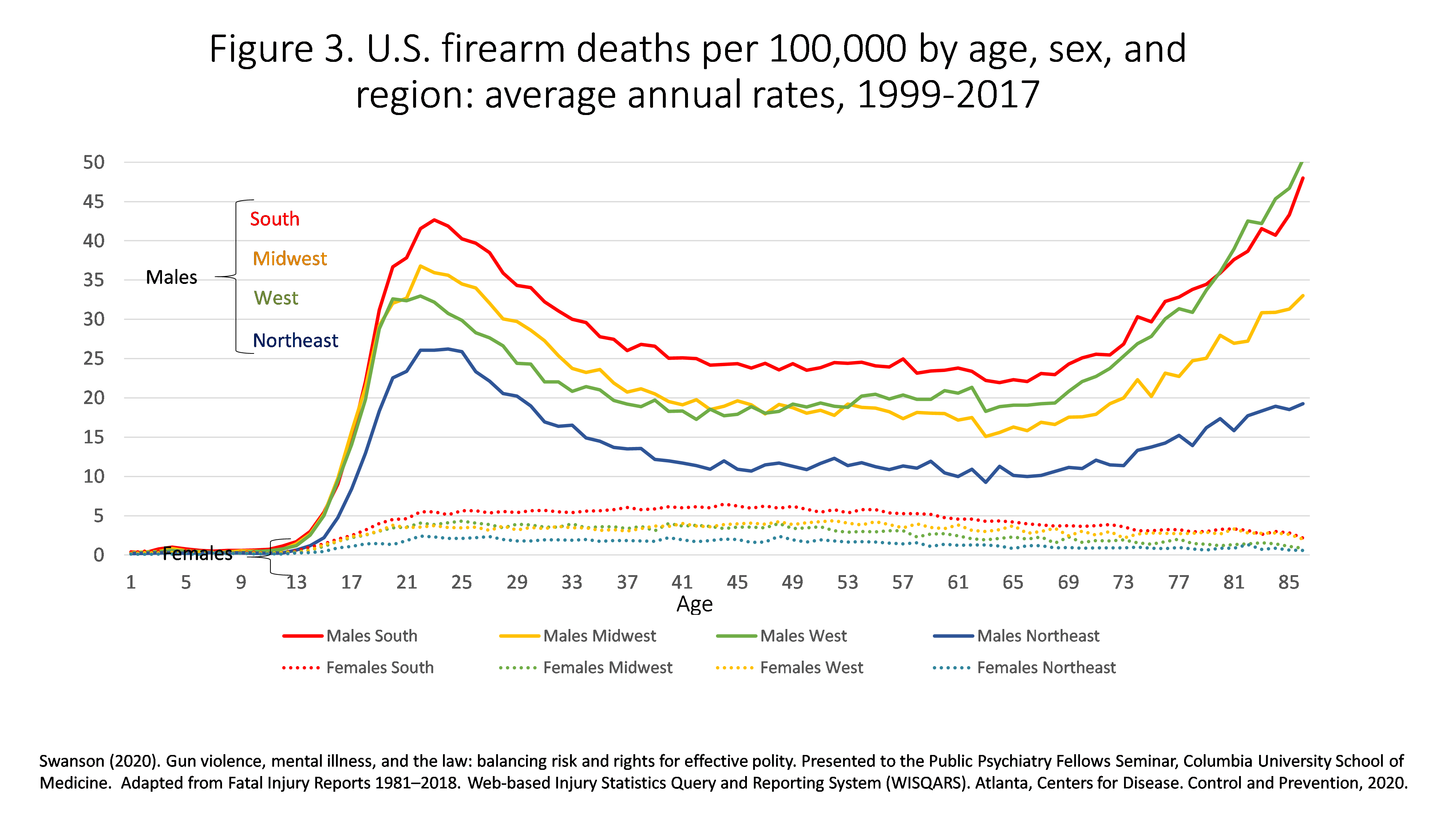