In 2012, I published an article examining the interplay between Indians (Indigenous Americans) and guns.[1] That article traced the relationship between Indians – individually and as members of Native Nations – and firearms, stretching from the earliest days of contact between Natives and colonizers, up to present day. The complex historical and legal dynamics discussed therein were animated by three intertwined theories, articulated as exceptionalism, citizenship, and race, respectively. Since that article was published almost a decade ago, there have only been a few scholarly works that have contributed to the conversation around guns and gun rights in Indian country. But, as the United States continues to set itself apart as a nation in which gun rights seemingly flow in one direction – more guns and greater gun rights – the issue of how Indian tribes govern the ownership, use, and control of guns remains relatively unexamined.

There are several possible explanations for this lacuna in the gun rights literature. For one, Indian tribes are pre-constitutional, and their sovereignty predates the formation of the United States. The primary mechanism for handling relationships between colonizing forces and the Indian tribes for the first several hundred years of contact was through treaties. Even after Congress ended treaty-making with Indian nations in 1871, the United States continued to engage with Indian tribes on a sovereign-to-sovereign basis. Thus, even though Indian tribes are mentioned three times in the U.S. Constitution, they have never been brought within its ambit.[2] Practically speaking, this means that Indian tribal governments are not bound by the United States Constitution, and thus, not constrained by the Bill of Rights, which, of course, includes the Second Amendment’s right to bear arms. Though Congress sought to remedy this situation with federal legislation by passing the Indian Civil Rights Act (ICRA) of 1968, the statute does not address the gun rights issue.[3] In fact, the ICRA only extends select provisions of the Bill of Rights to Indian nations – excluding, for example, a prohibition on the establishment of religion, among others – and altogether omitted a Second Amendment corollary.

It is curious that in all the legislative history around the ICRA – much of which was focused on issues related to reservation crime, a matter potentially related to gun control concerns – there was no discussion pertaining to gun rights, gun control, or the Second Amendment generally.  However, when viewed in the context of contemporaneous events occurring in the United States at the time, one possible explanation comes into focus. During the 1950s and 1960s, state laws ensuring the right to bear arms were in ascension. In fact, by 1968 when the ICRA was passed, thirty-five states had enacted some form of constitutional protection for the right to bear arms. Much of the debate – and heightened consternation – around gun rights at the time was linked to race and the civil rights movement. Overt linkages were being made between gun rights, gun violence, and racial hierarchies. Forces on all sides of the gun issue viewed gun rights as playing complex and sometimes competing roles in the nation’s move toward greater racial equality. Segregationists, for example, may have held firm to a belief in gun ownership as a mechanism to oppose the civil rights movement. On the other hand, some minority rights groups – including, most famously, the Black Panthers – connected gun rights to a right to self-defense and a broader case for racial equality. With the rise of the “Red Power” movement among American Indian activists, Indians, too, were swept up in the debates around white supremacy and gun laws. The initial occupation of Alcatraz by members of the American Indian Movement took place in 1964, in the midst of the civil rights debate and prior to the passage of the ICRA. Thus, although the subjugation of Indians as a racial matter – more than merely a political one – was only embryonic in the civil rights discourse, the link between racial equality and armed resistance already had been clearly demonstrated in the robust debates over gun rights. Put in the broader historical context, then, it is perhaps unsurprising that Congress was not preoccupied with ensuring the on-going rights of Indians to arm themselves.[4]

Accordingly, several hundred years of American history and law have reaffirmed the sovereign status of Indian tribes and their concomitant freedom to self-govern, albeit subject to the plenary authority of Congress. As a result, there are over 67 million acres of Indian trust land in the United States under the jurisdiction of Indian tribal governments who are, as I addressed in my prior work, free to govern in tribally-specific ways with regard to gun rights and gun regulation.

Because of this unique legal formation, it’s possible that there could be distinctive gun laws emanating from Indian country – from mandatory carry to wholesale bans or a range of options in between – but research into tribal gun laws has revealed very little activity of this kind. One possible explanation for a lack of appetite on the part of tribal governments to heavily regulate firearms likely lies in the nature of tribal law, history, and culture itself. All Indigenous tribes in what is now the United States are, to varying extents, rooted in a culture of subsistence hunting, fishing, gathering, and agriculture. Of course, for most of history, hunting was conducted with bows and arrows, knives, and other tools. But the advent of the gun revolutionized hunting for Indian tribes, altering not only food sources, but also the nature of trade and commerce between tribes and settlers. The gun only further instantiated hunting as an important feature of tribal life. Even today, the hunting of animals – by gun or otherwise – is not only, in many cases, protected by treaty, but is also a central feature of religious and ceremonial life in many Indian communities.

Moreover, Indian reservations are (not always, but oftentimes) similarly situated to other rural, non-Native communities within the US. Such places are often typified by massive, sparsely populated stretches of land, where livestock may need to be protected from predators, and where there are often scant law enforcement officers to police the area. In such rural communities – such as the one where I was raised in Southwest Oklahoma – gun ownership is commonly viewed as essential to preserving the safety and security of the homestead, regardless of whether one is situated within or without Indian country and regardless of race and tribal citizenship.

For all these reasons, it is perhaps unsurprising that Indian tribes appear not to have taken bold steps to radically alter existing gun rights exercised on tribal lands. Nevertheless, the issue of the regulation of firearms remains a curious one, particularly when coupled with questions of criminal jurisdiction. This inquiry has been heightened by recent legal changes emanating from the Supreme Court. In the 2020 case of McGirt v. Oklahoma, the Supreme Court held in a 5-4 decision that the Muscogee (Creek) reservation in Eastern Oklahoma had never been extinguished or disestablished, despite over 100 years of encroachment by the state of Oklahoma into reservation lands.[5] The case was a watershed event, reaffirming the sovereign rights of the Muscogee Creek Nation over their traditional, treaty-protected territory. Since that decision, several courts have held that the rationale supporting the Court’s decision in McGirt must be extended to the other four of the “five tribes” who are situated similarly to the Muscogee Creek by virtue of their treaties: Cherokee, Choctaw, Chickasaw, and Seminole. Most recently, a Court of Appeals in Oklahoma held that the nearby Quapaw reservation also had not been disestablished under McGirt’s reasoning.[6] At this point, this means that the entire eastern portion of the state of Oklahoma is, at least for some purposes, under the jurisdiction of an Indian tribe.[7] And it is not clear whether McGirt’s reasoning will stretch to the other tribes in Oklahoma – there are 39 federally recognized tribes in the state, most of which took their lands as my tribe did, by treaty – and/or potentially even more broadly across the US.

As it currently stands, there is a debate over whether McGirt was meant to be limited only to the criminal context, or whether it might be expanded to apply to civil regulatory jurisdiction as well. But even if McGirt’s holding continues to be limited to criminal jurisdiction, the implications for crime and governance in Indian country within Oklahoma still will be meaningful, particularly for two categories of defendants: Indians who commit crimes in Indian country, regardless of the status of the victim; and non-Indians who commit crimes in Indian country against Indians. In the first instance, Indian defendants may be subject to dual prosecution – tribal and federal – per the ‘separate sovereigns’ doctrine, with felony prosecution undertaken by the federal government.[11] In the latter case of crimes committed by non-Indians against Indian victims, criminal jurisdiction will fall exclusively to the federal government. In both cases, differences between tribal, state, and federal laws – and, concomitantly, sentencing authority – pertaining to crimes generally, but certainly also to crimes involving guns, could result in a marked change in crime and governance for a large percentage of Oklahoma’s population.

Since the McGirt decision – and, correspondingly, the death of Justice Ginsburg and the subsequent confirmation of Justice Coney Barrett to the Court – the State of Oklahoma has filed more than two dozen petitions urging the Supreme Court to overrule McGirt. Meanwhile, however, the Muscogee Creek Nation, as well as the other impacted tribes in Oklahoma (including the Cherokee Nation, the largest Indian tribe in the United States), have massively ramped up law enforcement, enhancing capacity at every stage of the criminal justice process to address the changing dynamics and growing caseload of Indian country crime. It remains to be seen whether, how, and to what extent this shifting jurisdictional framework will impact gun ownership, rights, and regulation going forward. 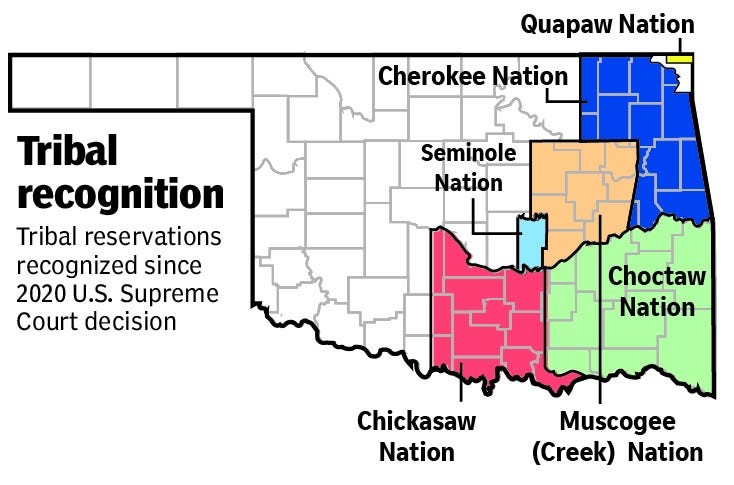 Click here to view a PDF version of this essay.

[Ed. note: This essay is part of a collection of writings from the Center’s 2021 roundtable on Race and Guns in America.]

[10] States retain criminal jurisdiction over all crimes involving no Indians, such as when a non-Indian commits a crime against another non-Indian or commits a victimless crime. See US v. McBratney, 104 US 621 (1881).